EXTRACT OF BIONERGETIC STUDY OF THE PERSONAL EMO:

IT’S IMPACT ON THE CHACKRAS AND AURA

The aim of the study is to determine if the Personal Emo affects the human bioenergetic field. Here included we have the subjective perception of those that have undergone the test.

The test was carried out on a total of four people, 3 of them wearing the personal Emo and the other was the control subject. 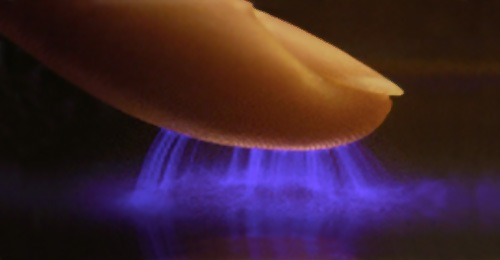 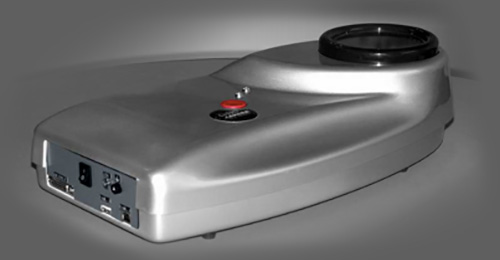 In order to photograph, record, evaluate and quantify the bioenergetic changes (aura, chakras, colors and biogrammes) in the subjects, the following were used:

To prevent subjects from autosuggestion they are given no type of information. 5 to 7 readings are taken of each one of them. They are advised to wear it as a necklace to prevent loss.

PAUL, during the 69 days in which he is in contact with the Personal EMO, experiences a significant increase in the size of the aura, a measurement of 70 to 90, an indication of the amount of energy given off.  A positive change was noticed in all chakras, especially in the lower three chakras (from 20-40 to 90-100 levels). 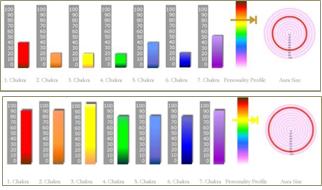 NORBERT, during the 77 days in which he is in contact with the Personal EMO, he experiences a significant increase in the size of the aura, a measurement of 70 to 100, an indication of the amount of energy given off.  A positive change was noticed in all chakras, especially in chakra 6 (+90) and 7 (+50) going from 40 to 50. 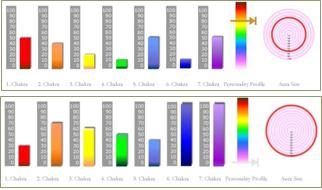 PAULA, during the 64 days in which She is in contact with the Personal EMO, she experiences a significant increase in the size of the aura, a measurement of 60 to 100, an indication of the amount of energy given off.  There is also evidence of a positive evolution in strength and overall balance of each of the chakras, especially chakras 3 (+70), 4 (+80) and 7 (+70). 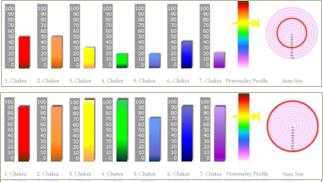 AURA VIDEO system.  Aura perceived before using the Personal EMO and after continued use. 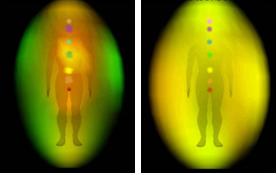 The tones and the contrasts become gentler and changes are observed towards a more communicative and friendly attitude. The colors surrounding the Aura 2 have evolved from green to yellow, showing a predominance of creativity and tolerance. A clear improvement is seen in the outline of the chakras, having become more rounded and with a clearer outline in each one of them, indicating a greater balance and harmony. 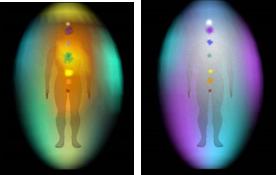 The colors surrounding the aura have evolved from turquoise blue (related to communication, intuition and sensitivity) to the violet and lavender tones showing a greater spiritual presence. A clear improvement is seen in the outline of the chakras, having become more rounded and with a clearer outline in each one of them (especially the heart chakra), indicating a greater balance and harmony. 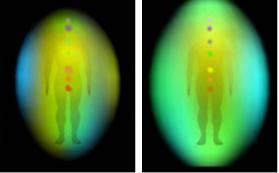 There are no drastic changes in the predominant color of the aura which indicates personality type.

More blue tones appear on the left side of the body and these are related to the female part and indicate the entry of new energies. The color blue is associated with sensitivity, intuition and compassion.  A clear improvement is seen in the outline of the chakras, having become more rounded and with a clearer outline in each one of them, indicating a greater balance and harmony.

Kirlian GDV system. Graphic summary of the alignment of chakras 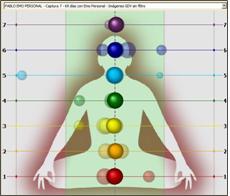 PAUL: clear movements are observed in the process of alignment of the upper chakras (connection with the higher realms, spirituality and life mission) and lower chakras (earth connection and self-esteem). 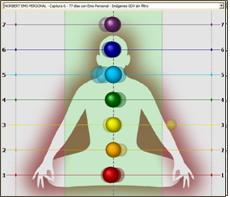 NORBERT: more pronounced movements are observed in the third chakra (communication, expression) and in the seventh (higher connection) and also in the repositioning of the lower chakras (earth connection and self-esteem). 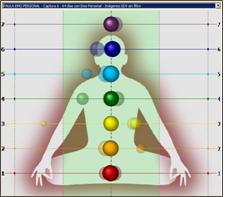 PAULA :  Widespread repositioning movements are observed in all chakras. It is noticeable the rapid convergence towards vertical alignment in the final readings.

Kirlian GDV system. Deduction of the energy field according to the Kirlian Camera reading

During the 69 days in which PABLO was in contact with the Personal EMO we have measured changes in his energy field.  A significant distortion of the field has been detected in readings 3 and 5, possibly for personal reasons (stress at the beginning of academic year, etc .). However in the last reading the field becomes wider and has regained strength as if it there were no energetic leakages in comparison to previous readings.

During the 77 days that NORBERT was in contact with the Personal EMO the energy field uniformity was measured.  An increase in the uniformity and thickness of the energy field was noticed.  Where there were energetic leaks at the beginning of the study, these have now been sealed specially in the root chakra.

During the 64 days that PAULA was in contact with the Personal EMO the energy field uniformity was measured.  A clear redistribution of energy is appreciated, giving a greatly more uniform and balanced field.  There has been a sealing of energetic leaks which appeared at the beginning of the study specially in the neck (5 Chakra associated with the expression), and in the solar plexus (3 Chakra life force, self-esteem).

Conclusions on the results of the three subjects

Firstly it’s important to point out that the methodology used in the study involves the choice of people who have no belief system that predisposes them to accept certain benefits of the Personal EMO. By the same logic the subjects are not informed what the EMO is or what it is used for.

After careful observation of all data recorded about the subjects’ bioenergetic field subjects it is found that the consciousness vibrational amplifier, the EMO Personal, has a positive impact on the “aura” of the three persons, and the “neutral” subject.

After two months of using the EMO Personal the main evidence demonstrates that here is an improvement in the intensity and in the balance of the chakras and that it has an enhancing effect on the aura.

There is a common pattern to all subjects who participated in the study, which is the appearance of a kind of ‘healing crisis’ in the second or third reading. In this stage of the process, after being in contact with the Personal EMO for about a fortnight, erratic variations are detected in the levels of the chakras, changes in the color of the aura and abnormal biometric values. It is just after this stage that the subject begins to show changes in perception and behavior. In some subjects an adjustment period may be needed.

The relationship Heaven – Earth flows better with the Connector.

It opens your heart and activates personal strength.

The Personal EMO does not lead one to a specific state. Changes occur in some cases and in others one’s own personality is strengthened as a result of increased energy and of the harmonization of vortices and plexuses.