Author:
Joan Miquel Viadé  Information Technology Technical Engineer (UAB 1994), expert in Feng Shui and Geopuncture (2004) and Master in Coaching (2009). Creator of the energy regulation system “Space Therapy”. Assiduous collaborator with various institutions and companies in the conduct of studies of quality and performance of elements, and in designs for energy regulation in water, space and agricultural land.

This study focuses on two aspects of the ESPACIAL Emo®:

This study is an analysis of the EFEE, performed with the general aim of determining if it, in effect, can balance and harmonize the energy of a space.

As this study will show, ESPACIAL Emo® is capable of balancing and harmonizing any type of space (outdoors or in open or closed indoor areas). Nevertheless, the form, size and materials used in the manufacture of ESPACIAL Emo® suggest that this is a piece primarily designed for indoor use. Accordingly, all the measurements performed for this study (indoors and outdoors) are designed to test the activity of EFEE in a maximum area not greater than that of an average apartment or dwelling (75 m2), i.e., a circumference of 10 m in diameter.

ESPACIAL Emo® is a creation from the Nayadel working group that has been conceived and designed from their earlier studies in the area of reactivation and harmonization of water through the application of geometric forms, symbols and natural gemstones.

ESPACIAL Emo® is made entirely from aluminum with a sandblasted exterior. It comes in two solid sections, with no interior or moving parts or mechanisms, with the exception of the vertex between both sections that acts as a fixed pressure joint between the two.

The first section, the antenna, consists of a 3-dimensional spiral formed of steel wire, 2 mm in diameter, that follows a hyperbolic geometric progression, moving along the three axes, x, y and z. This movement creates a shape that mimics, to a certain extend, the spiral trajectory, the vortex generated by water in movement (when it runs down a drain, for example). 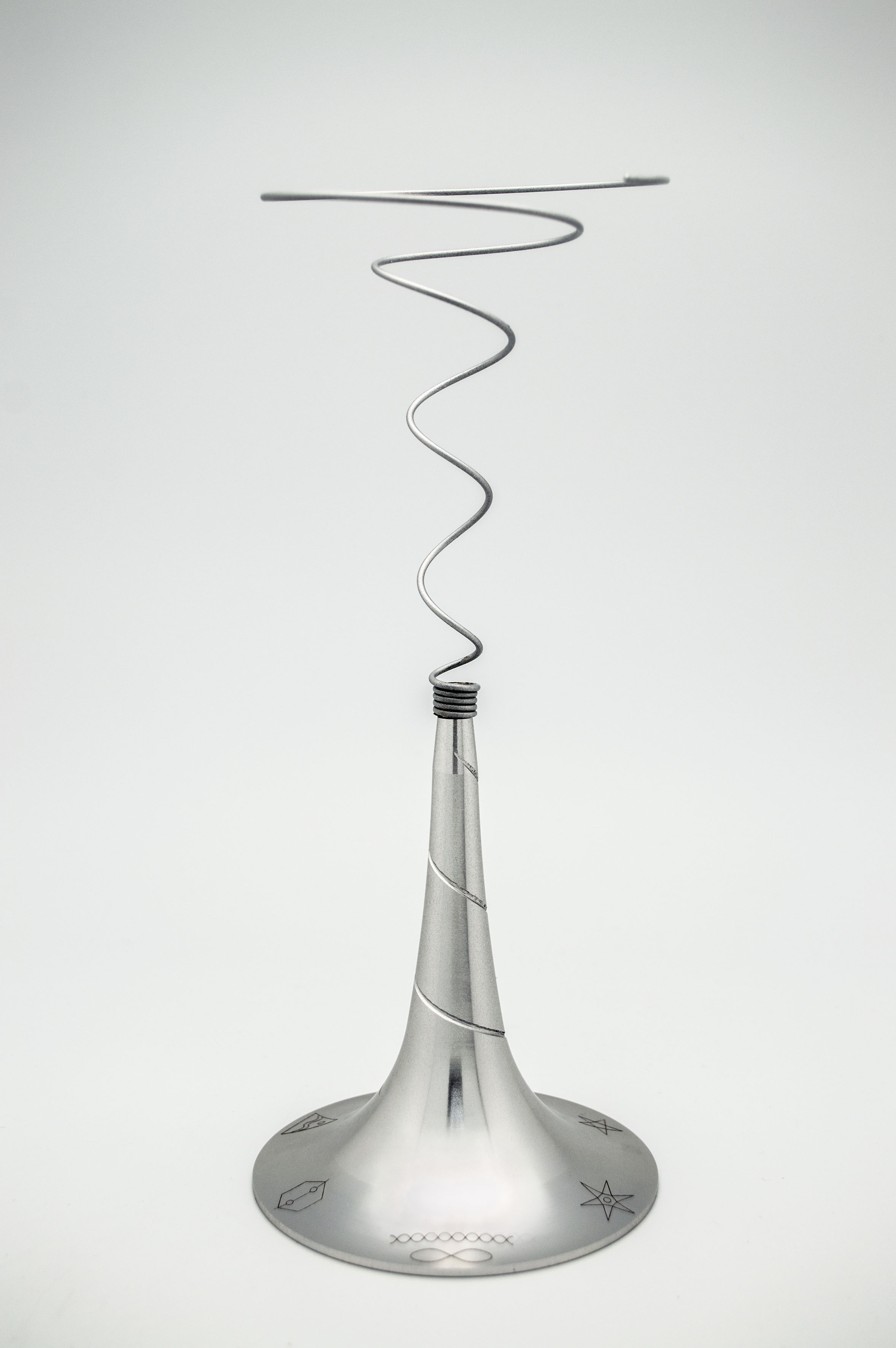 The second part, the base, consists of a hyperboloid of revolution identical to the first, but completely solid. As this is a compact part, three figures appear in relie
f in the base. The first of these traces the surface of the whole section in the form of a hyperbolic spiral, identical to that generated by the antenna; the second consists of six additional symbols designed by the Nayadel team that appear in the widest part of the base, every 60 degrees, coming together to create a circumference; and finally, the third, located in the lower surface of the base.

Both parts are joined at the narrowest section of the hyperboloid with a pressure mechanism, uniting to create the final piece that is the ESPACIAL Emo®.

Finally, ESPACIAL Emo® works by fitting both parts, the antenna and the base, together and placing it on its base in a vertical position on any solid surface.

The general objective of this study was firstly to define the size and the intensity of the energetic field generated by ESPACIAL Emo®, and secondly, to determine its ability to correct areas of geopathic stress in areas not greater than the size of an average apartment or flat, i.e., 75 m2 (over a circumference of 10 m in diameter).

To determine the size and intensity of the energetic field generated by ESPACIAL Emo®, we made various measurements of the characteristics (intensity and point of balance) of the terrestrial field of a circular area around the device, and compared measurements obtained before and after placing the ESPACIAL Emo® in the center of the circle.

To obtain the measurements, firstly a random position p was fixed in the middle of a flat, obstacle free area. From this position p, two imaginary reference systems were constructed. 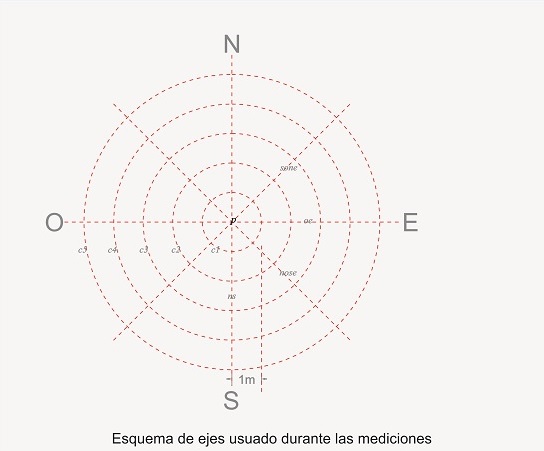 The first imaginary reference system consisted of a series of concentric circles (c1, c2, c3, c4, c5) with increasing radii, with p as the center, each growing at a rate of 1 meter in radius, to imitate the pattern of the waves that form when a small stone is dropped into water.

The constructed reference model is sufficiently large to represent and/or demarcate the surface area of a standard home. In Graph 1, a living space with an area of 75 square meters is represented in pale violet.

Characteristics of the selected space

To make my measurements, I selected a completely flat, obstacle-free, grassy area, with a practically negligible northeast-southwest slope of less than 0.5%, situated on the banks of a river that flows through the urban center of the city. The specific location chosen was the river park that runs along the banks of the River Besós, in the area located in the northern bank between the bridges that join Barcelona with Santa Coloma de Gramanet.

When position p had been randomly selected on the grassy area, the bordering zone was checked, and an underground water stream generating geopathic stress was detected at 6.5 m of distance from point p in the northeast, extending about 3 meters on each side of its central axis. 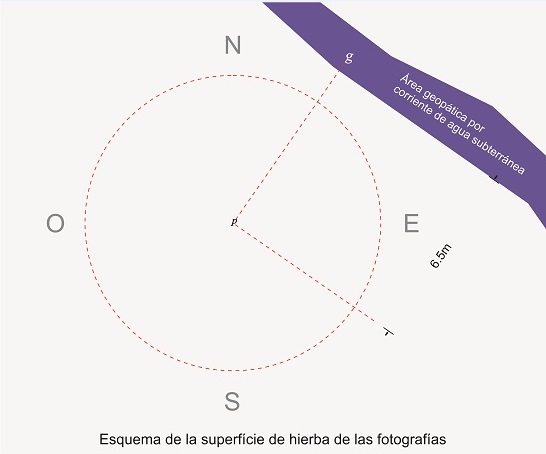 The rest of the area of the circle marked out from position p had stable energy levels.

The p position selected meant that the resulting study area was split into 2 large zones. The first of these, in the northeast zone (depicted in blue tones), was affected by a nearby source of geopathic stress and revealed terrestrial values insufficient for life and human activity, below the minimum energy levels recommended for health. The second zone (depicted in yellow) had a stable terrestrial energy level, below the minimum recommended for health, but which could not be considered to be directly affected by geopathic stress. The energy level found in the yellow area is the usual level detected in most of the homes located in the urban center of any city.

This area was, then, the perfect place for simulating the usual ch 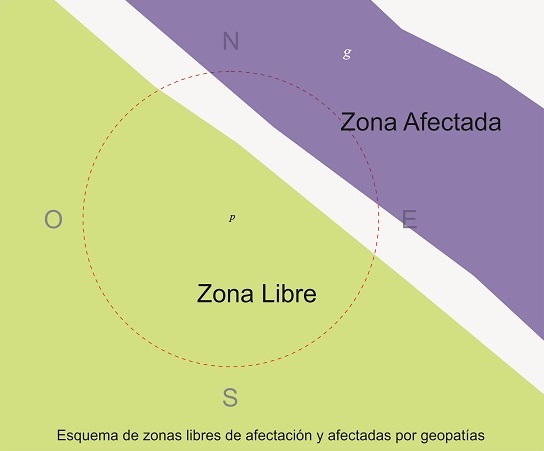 aracteristics of a standard home in the middle of an urban center. Thus, we could determine on the one hand the extent of the field generated by ESPACIAL Emo®, and at the same time, also test the efficacy of ESPACIAL Emo® in environments affected by geopathic stress.

To determine the measurements for this study, I chose an outdoor site instead of an apartment or a closed space, simply because the lack of walls and/or other obstacles would facilitate the measuring tasks. However, the results and conclusions obtained can be fully extrapolated to the behavior of ESPACIAL Emo® inside the home.

Results of the measurements

The groups of results obtained during the tests carried out with ESPACIAL Emo® are presented below. 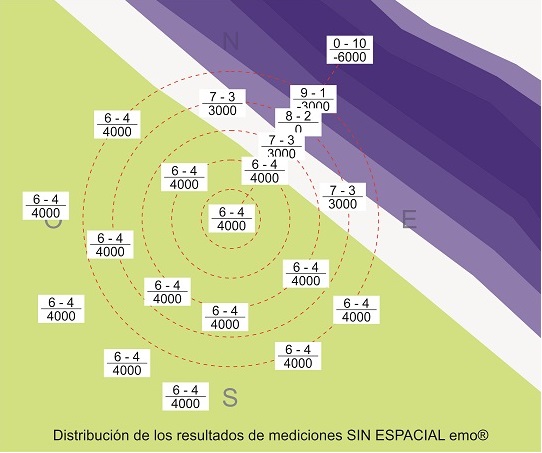 Group of energy measurements from the reference area without the presence of the ESPACIAL Emo® on position p.

Measurement 1: Characteristics and natural energy values of the reference area.

Measurement 2: Characteristics and natural energy values in the p-g axis perpendicular to the geopathic stress.

When the measurements had been obtained from the natural terrestrial field of the selected area, ESPACIAL Emo® was placed on position p, and after 3 minutes, the following set of measurements was obtained.

Measurement 1: Characteristics and energy values of the reference area.

Measurement 2: Characteristics and energy values of the reference area directly above the geopathic stress.

To carry out this study, different sets of tests were performed with the ESPACIAL Emo® between January and April of 2015. The results were always very similar, but to avoiding turning this report into an interminable list of tables of data, since the results hardly varied from one group of measurements to another, only the results pertaining to the measurements obtained on 21 April 2015 are included. In any case, however, the conclusions of this study are based on the results of all groups of measurements.

After examination of these results, conclusions drawn on the energy field generated by ESPACIAL Emo® and the ability of its energy to correct spaces affected by natural geopathic stress, are the following:

3.1. At a distance of 5 meters (typical distances specified for covering the full area of a standard home), the level of regulation offered by ESPACIAL Emo® is sufficient to achieve optimal levels of regulation of terrestrial energy.

4.1. In effect, the presence of geopathic stress in the area of activity of ESPACIAL Emo® reduces its performance in the zone directly affected by the geopathic stress. However, the level of impact and distortion produced by the source of stress is fully compensated by the action of ESPACIAL Emo®, so that the resulting energy values obtained continue to be twice as high as the minimum levels suitable for life and human activity.

This website uses cookies to improve your experience while you navigate through the website. Out of these, the cookies that are categorized as necessary are stored on your browser as they are essential for the working of basic functionalities of the website. We also use third-party cookies that help us analyze and understand how you use this website. These cookies will be stored in your browser only with your consent. You also have the option to opt-out of these cookies. But opting out of some of these cookies may affect your browsing experience.
Necessary Toujours activé
Necessary cookies are absolutely essential for the website to function properly. This category only includes cookies that ensures basic functionalities and security features of the website. These cookies do not store any personal information.
Non-necessary
Any cookies that may not be particularly necessary for the website to function and is used specifically to collect user personal data via analytics, ads, other embedded contents are termed as non-necessary cookies. It is mandatory to procure user consent prior to running these cookies on your website.
Enregistrer & accepter